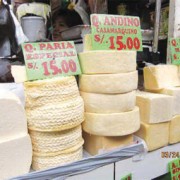 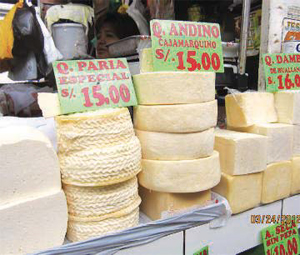 Cheese was a big hit at a stop in Peru

“When we find something we like that could be usable for us, we translate it to the menus. We stay authentic and don’t change it too much. We’ve had a lot of success doing that.”

One such dish is Lomo Saltado, a very common Peruvian dish that’s a one-bowl meal of steak, potatoes, vegetables and french fries served over rice.

“The flavor is Asian-South American fusion,” Murray says. “There is a huge Chinese population there and the fusion of flavors is exciting and different.”

Lomo Saltado is “an example of something you wouldn’t see unless you went down there yourself,” he adds.

Earlier this spring, Murray prepared Lomo Saltado at Le Center Elementary and Middle School, one of Taher’s accounts in Minnesota.

As Peruvian beats played in the background, students lined up to try something new.

“They liked it, and when students come up to me and personally thank me after lunch, that’s why I do this,” Murray says. “That’s when I drive home with a smile on my face.”

Peruvian Sliders are another menu item that successfully translated to school menus.

“When we got back, we found out that Wisconsin, the next state over, is one of the country’s largest producers of alpaca meat for consumption,” Murray says. “It’s a small world.”

The sliders are served two-to-a-plate with Aji Amarillo sauce (a creamy sauce with a kick made of amarillo peppers and queso), Salsa Criolla (an onion relish with lime juice) and shoestring sweet potato fries.

The vegetables in the sauce and the salsa provide enough vegetables for a serving according to school lunch guidelines, Murray says. 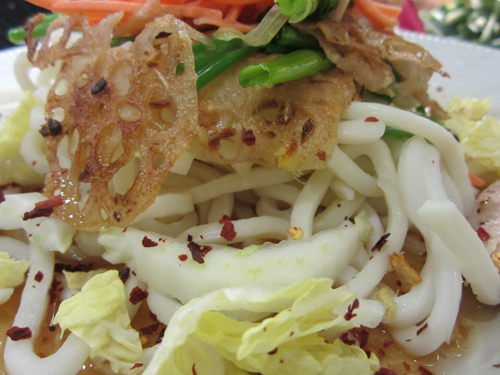 Noodle dishes are really catching on in this country, and the Taher chefs have been on the cutting edge, especially since their visit to Japan. They recreated pan-seared lotus root and green onions with udon noodles, a dish that appeals to both kids and adults.

“The interesting part of that dish is that it crossed over from schools into B&I accounts, and several other dishes have, too,” Murray says.

“Another example is from Morocco. The best thing we brought back was the tagines (slow-simmered stews with root vegetables and chicken thigh meat, traditionally cooked in a clay vessel).”

Translated to big-volume cooking, tagines come out great when roasted in hotel pans and served over couscous, Murray says.

“Morocco had the most interesting outdoor markets,” he adds, summing up the whole point of traveling as a chef. “They’re out in the middle of nowhere.That’s how you see the culture—you go out and experience it.”