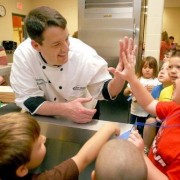 Chef Jay Rommelfanger came to Deering Elementary to prepare a special lunch treat for the students and promote healthy eating.

It’s not easy getting kids to eat healthy food. Mention a vegetable and a parent is likely to get a disgusted look and a complaint.

So the Dawson-Bryant schools are trying to get kids used to eating healthier and sooner.

And another way they are trying to get kids to eat healthier is to show them healthy food can be good. To that end, Petrie brought in Chef Jay Rommelfanger to cook for the students, high schoolers on Wednesday and the elementary classes on Thursday.

The high schoolers liked their selection of the Italian-style Porchetta pork sandwiches but the elementary kids were not sure about their selection – Chinese pork and rice.

“What is that?” was frequently asked.

“How do you know,” Petrie asked. “You haven’t tried it yet.”

Some were reassured after being told sweet and sour sauce is sort of the Chinese equivalent of barbeque sauce and others refused outright to expand their palates.

Rommelfanger said Taher Inc. has a program called “Food For Life” which starts in elementary schools to teach and help get children used to healthy eating.

“We are concentrating heavily on fresh fruits, fresh vegetables, a lot of prepared from scratch meals,” he said. “We hope that as they get older they will stick with it.”

Petrie said Chef Rommelfanger comes in once a year to make the students different kinds of food they may not see otherwise.

“The kids get a big kick out of seeing a chef here and they get all excited,” she said.

Petrie said the school system has been making more things from scratch and eliminating junk food. That means no soda, no chips, no candy and no french fries.

“It’s getting harder and harder to teach nutrition, there are so many fast food restaurants and that is what they are into,” she said. “So we are trying to teach them that there are more options than McDonald’s.”

The school even stopped frying food this year.

“My concept is to teach them young,” Petrie said.

Rommelfanger works for Taher Inc. and travels around the country cooking at schools whose food is supplied by the company.

“I just come in and make them something that isn’t normally on their menus,” Rommelfanger said.

As a perk of his job, he gets to travel to foreign lands and figure out how to make other cuisines into foods American kids will eat.

Rommelfanger said his meals are designed to be healthy.

“The meals I prepare on a daily basis are a little healthier, they are completely made from scratch. We want the least amount of preprocessed foods as possible,” he said. “We try to introduce students to flavors and combinations they might not ever get in their lives.”