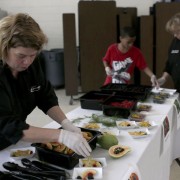 JACKSON, MI – Ugli fruit, papaya, fennel and kohlrabi were among the fruits and vegetables that lined tables in the McCulloch Academy of Technology & Science cafeteria.

Kindergarten through fifth-grade students shuffled through the serving line and made their way to a table to try the unfamiliar produce — some receptive, some resistant, some uncharmed by the new flavors.

But during the fruit and vegetable tasting coordinated by Jackson Public Schools Food Service Director Brant Russell and others in the Taher Food Service Department on Thursday, June 5, there were no hard feelings if students didn’t take to a food.

“We just want to educate them on different kinds of fruits and vegetables — we tried to do something that wasn’t normal,” Russell said.

Just getting a child to try an exotic food can be a difficult task, but Russell and his team were largely successful in that pursuit. Most students noted their opinion of each food, whether that was “Love it!”, “Maybe” or “No thanks,” and their feedback will influence school meals in the future.

Produce such as passion fruit, Brussels sprouts, dragon fruit and white asparagus are not typically served on students’ kitchen tables, so Taher food service employees made an effort to answer questions about the items to make them more approachable and understandable.

One group of fifth-grade girls said they regularly eat fruits at home, but not the kinds they sampled.

Sweet potatoes and blackberries, also common in students’ homes, were popular during the taste test.

Russell said variety is important for students so that they have different vitamins and minerals instead of a fruit intake consisting solely of oranges.

“It also increases their acceptance of new items,” Russell said. “If we’re throwing out jicama or something like that, something that’s different, it’ll kind of open their eyes to different things.”

Kindergarten teacher Hillary Fairbanks said though most of the produce was new to her students, a majority was open to trying everything.

Matthew Russell, office manager for the Food Service Department said it is easier to start exposing students to foods when they’re young. He said taste tests are conducted once a month at every school and offerings have become more diverse over the last few years.

“I’ve been office manager for three years now, and from what I can remember, we didn’t do taste testing like this,” Russell said. “And if we did, it was probably with raspberries and blueberries — things that people know.”

A grant through the Fresh Fruit and Vegetable Program, administered by the Food and Nutrition Service of the U.S. Department of Agriculture, funds a fruit or vegetable snack every school day for students, and funds the taste tests.

Fairbanks said she likes the healthy snack program, as it is the last thing students eat before they go home.

This school year, the grant of about $50 per child covered only McCulloch. Russell applied for the funding, which would take effect next school year, for six elementary schools and the Middle School at Parkside. Program requirements call for schools to meet a 50 percent or more free or reduced threshold, and those facilities qualify.

To provide meals for children outside of the school calendar, Russell also oversees a summer feeding program. The service, also funded through the USDA, began as a lunch program more than 30 years ago.

The program now offers breakfast and lunch from June 16 through Aug. 8 at 36 sites in the Jackson area. The YMCA and several churches and organizations are offering their spaces for the program. Other sites will be at schools.

“On a really good day we’ll do about 1,500 lunches,” Russell said. “So there’s definitely a need in the area.”

Data from the Center for Educational Performance and Information shows that 69 percent of students in the district qualify for free or reduced lunches through the federally funded National School Lunch Program.

But the Food Service Department aims to provide for students beyond supplying meals. Russell said opening students’ eyes to new foods is a significant part of the job.