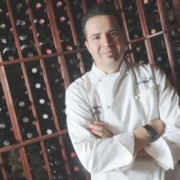 How did you wind up in the restaurant business? I grew up on a lot of different

foods. I have British and Mexican grandmothers, and my step-dad’s mom is Puerto

Rican. They taught me how to cook. I’ve worked in several kitchens, including Lulu in

My wife is from here, so we moved to Minnesota a few years ago to raise our children. I

was opening sous chef at Tria in North Oaks and, most recently, Chambers Kitchen in

What’s the dish you are most proud of? The lamb three ways – shank, loin and

housemade sausage on top of spinach and polenta.
What’s the dish you hate to cook? I really don’t hate to cook anything. I’ll take

anything and make it fun.

Any “off the menu” dishes we should know about? We just opened in July (under

new ownership) and are focusing on the menu and doing that well. Every once in a

while, I’ll run a special.
What’s the weirdest food you’ve ever eaten? When I was cooking at Waldorf

Astoria in New York, we cooked fried tarantula for the Explorers Club. I killed 500

tarantulas that day, so I just had to try it. I didn’t like it. When I was at the French

Laundry, I tried the pancreas from a monkfish. I didn’t like that, either.
What would you want your last meal to be? Three things from the cultures I grew

What’s next on the horizon? To just keep doing what I’m doing. Things are going

really well here. The next step is to make more of our own products. We’re already

making our own bread.