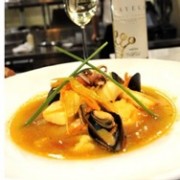 Paul Laubignat left his home in Quiberon, Brittany, France in 1963 to cook at the first French hotel in the

United States, The Sofitel in Bloomington.

In a sense, he never left us even though he whirled through employment at Hyatt Regency in Hawaii, Watertower Hyatt in Chicago, La Tortue restaurant on First Avenue in Minneapolis, Pfister Hotel in Milwaukee, Radisson Plaza in downtown Minneapolis and Registry Hotel in Bloomington.

Then he had his own, much admired Chez Paul in downtown Minneapolis, followed by a family effort at the Marina and Nancy’s Landing at Lake Waconia.

For the last year he has been one of a dozen chefs – his title is professor – with the Taher firm, which feeds thousands of people every day in schools, churches and businesses.

These corporate chefs are taken together on an annual trip to another country – Mexico, Spain, France, Morocco – so the chefs can ingest the foods and cooking techniques of other cultures.

These travels and experience are what Laubignat brings to his supervision of the Wayzata Eatery.

He demonstrated new ideas with several items currently being added to the lunch and dinner menus, as well as the Après Midi menu for between-meal service starting May 1 (more about that later).

We began our lunch with breaded triangles of Manchego cheese from Spain, sautéed and served for dipping into a light, quince sauce.

They were good enough to eat a dozen of them but along came a Mediterranean salad of baby beet greens and tiny stuffed red peppers.

Next was a garlic sausage baked in phyllo pastry, perked with some candied onions.

Following – and plainly hearty enough for anyone’s light lunch – were two lollypop lamb chops, served resting on an upside down cupful of Israeli couscous enriched with cumin and other spices. This dish was really toothsome.

As an entree we shared a bowl of bouillabaisse, which Chef Paul reorganized so it could be an individual bowl rather than a huge pot to serve many hungry people.

Pieces of snapper, halibut, shrimp and mussels were atop a crouton of fine French bread ready to be slathered with aioli and sauced with seafood broth – and more aioli.

It was a wonderful creation, perhaps with inspiration from the Brittany of Laubignat’s youth.

All of these items are on the Eatery’s dinner menu ranging from $8 for the cheese bites to $28 for the bouillabaisse.

And then we had a “deconstructed” banana cream pie dessert. A caramelized half of banana was laid over custard atop a base of baked corn flakes and cocoa, mixed. What a treat.

Now the innovation to celebrate May 1 is a new Après Midi menu in service from 3 to 5 p.m. daily, offering a smattering of these same items plus others like truffle and leek macaroni and cheese ($10) and butternut squash raviolis ($14).

On May 1 only, all items on the Après Midi menu will be half price.