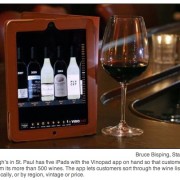 Modern technology has come to the aid of anyone who ever has been intimidated by a restaurant wine list.

In other words, anyone who ever has looked at a restaurant wine list.

A local creation, the Vinopad allows patrons to scroll through an eatery’s wines every which way: alphabetically, by region, vintage, rating points and, perhaps most important, price. Click on the bottle label image, and up pop in-depth reviews of the wine.

“Everyone wants to play with it,” said Bob Johnson, general manager at Forepaugh’s in St. Paul. “Sometimes it’s hard to get back [from customers].”

“We’re trying to help consumers get confident,” said the founder of VinoTech Solutions, “especially with the reviews.”

Restaurants from Atlanta to Sydney have been buying their own iPads and downloading menus and wine lists, usually with just the items and the prices. What differentiates the VinoPad is the addition of reviews from publications such as Stephen Tanzer’s International Wine Cellar and the popular CellarTracker site, which has an array of professional and amateur reviews.

Nordgaard inputs and organizes the info and leases the tablets. Restaurants can add information about each wine in mid-screen and include bin numbers, allowing oft-harried servers to find wines in crowded storage spaces.

Their lists also are more complete (many don’t have room on a printed list for that odd bottle or two from an older vintage) and au courant, with vintage updates and the ability to delete wines as they sell out.

Johnson said that since getting four Vinopads last year, Forepaugh’s has seen an uptick in sales of older, pricier and off-the-beaten-track offerings from its array of 400-plus wines.

“People used to just order wines they know,” he said. “Now some customers will look at the ratings and go with something costlier if they know a little about it. It’s the old ‘knowledge is power’ thing.

“The old customers like me think it’s cool, and the young ones say, ‘It’s about time.'”

But restaurants are using technological gadgets for a lot more than wine these days.

The Minneapolis restaurant Chino Latino has an ad campaign using QR codes that customers can scan with their smart phones to get food and drink specials or even a video of the chef. The restaurant has placed the codes on billboards, in bathroom stalls and on cocktail flags.

Chipotle customers now can use an iTunes application that lets them order and pay for their food in advance. More than a million Americans downloaded the free app during the past year, said spokesman Chris Arnold.

In addition, at high-volume locations patrons can pay for their order while waiting. At Minneapolis’ U.S. Bank Building, it’s common to see Chipotle employees wending their way among well-dressed lunch patrons with electronic swiping devices.

Another downtown eatery, Simple Sandwich, has two touch screens that let customers order and pay for their meals, “and hopefully by the time they get to the end of the line, their food is ready,” said general manager Jim Theisen.

He said that about 75 percent of Simple Sandwich’s patrons use the touch screens rather than the one “attended” station, and some devotees can get rather passionate.

“We have a couple of guys from a law firm upstairs,” Theisen said, “and they go to different terminals and race to see who can get done first.”