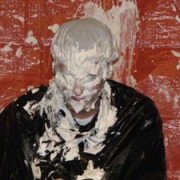 Some campus “favorites” stoically took pies to the face at close range while others weren’t as quiet about it during a “Pie a Professor” fundraising event Tuesday in Northland Community and Technical College in East Grand Forks.

Nondairy whipped topping pies flew at $2 a plate in the campus cafeteria, and by the end of the day, the event raised $186, organizers said.

The Phi Theta Kappa Honor Society will use the money raised to attend a leadership conference in Philadelphia in the spring.

“We thought it would be fun to get them involved with the students, especially right before finals week,” said Sarah Larrabee, the society’s president.

“That was awesome. That’s the best fundraiser they could’ve thought of,” Anthony Sanchez, a computer networking student said after his professor, Don Fischer, received multiple pies on stage. “I only had one pie, but that was awesome.”

Fischer didn’t flinch when student Steve Tup a armed himself with five pies and lifted up his protective garbage bags to deliver pies to his shirt and on top of his head like a hat, but quietly protested, “Not the

For their troubles, the targets were offered cookies to eat afterward.

One of the first targets, Sherry Lindquist, offered five extra credit points to prompt her students to take aim. She wore goggles, a shower cap and a garbage bag to keep off some of the topping.

Most of the targets volunteered for the event, but one said it was a 29th birthday present from her supervisor. “My boss signed me up without asking me,” said Myranda Young, a Taher Café employee. She took the pies in good spirits, even using the topping like hair gel to spike the front of her red hair. Young goaded the crowd to throw more pies, “I wouldn’t spit in your food. How do you know I don’t already do it?” Some students received free fountain pop coupons for giving her a birthday pie in the face.

The most anticipated target: Shawn Vandal, a prankster custodian. “He’s going to have a long line,” Jennifer Ekberg, the PTK vice president said mid-day. He was the last person scheduled at 3 p.m.

A group of students from the Physical Therapy Assistants program studied together while waiting for their program director to take the stage. Three of them rubbed pies on Justin Berry’s face. “He’d better give us extra credit in the classes,” Jacob Godon said. “We want points,” concurred Bill Westby, “and we wanted to show our love.”

Would there be retaliation? “Oh, no,” Berry said, then promptly wiped his hands clean on Godon’s shirt.