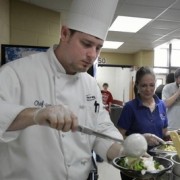 Chef Brian Shoemake dishes up a chicken and broccoli pasta for students at Oconomowoc High School, where he was hired by the school’s food service to create nutritious meals.

By Amy Hetzner of the Journal Sentinel

Oconomowoc – Before the first lunch period begins at Oconomowoc High School, students sidle up to see what chef Brian Shoemake is cooking.

“Chicken pasta broccoli bowl,” Shoemake says in answer to an inquiry. “I’ll get you to eat your broccoli.”

Well, maybe not that student. But in the 15 minutes that ensue, Shoemake manages to fill the bowls of at least 60 others with steaming rotini, strips of chicken breast, their choice of Alfredo sauce and, yes, freshly cooked broccoli spears.

The addition of Shoemake to the lunch lineup this school year is part of a larger effort at the school.

Like a number of schools throughout the state, Oconomowoc High School is trying to tackle that seemingly intractable barrier in the fight to improve childhood nutrition: the school lunch.

“Student tastes have changed so much in the last 10 years,” said Brenda Klamert, director of child nutrition services for the Oconomowoc Area School District. “They’re looking for healthy foods.”

Schools have been slow to meet the demand.

Sure, many have added salad bars. But most lunches remain high in saturated fat and cholesterol and low in fiber- and nutrient-rich food, according to the Physicians Committee for Responsible Medicine. The Washington-based group advocates a more vegetarian approach.

“Pretty nasty” is how MaryAnne Scherer, a registered nurse and former teacher, describes the lunches available to children at her son’s Milwaukee charter school on most days.

“Parents are thrilled,” said Scherer, whose own son is not able to partake because of dairy and nut allergies. “I think the first day, the kids were skeptical. It looks different. But now I think they’re really looking forward to it.”

Cost remains a barrier. But next school year, Highland hopes to have Outpost provide all of its breakfasts, which are cheaper than lunches.

Even in cases where schools have received assistance in incorporating more produce into meals, the obstacles of labor constraints and lack of funds have gotten in the way.

In an April 2007 report outlining its struggles in Madison, the group characterized the function of the school system’s food service as efficiently compiling food rather than cooking it. The food service was willing to allocate only “minimal time” to shredding, slicing, dicing and peeling fresh produce.”Part of it were the challenges that all school meal programs face, which is having an incredibly tight budget to work with, having very little money to buy food and very little money to prepare food,” said Doug Wubben, program coordinator for Wisconsin Homegrown Lunch, which helps local farmers supply food to schools.

Milwaukee Public Schools, where workers prepare 60,000 lunches each day, faces many of those same problems.

Labor is the costliest part of MPS’ food service, so the district spends a little more for pre-sliced apples, baby carrots and cut and cleaned lettuce, said Kymm Mutch, administrator of school nutrition services at MPS.

“When I tell a local farmer that I need 60,000 half-cut servings of a single item, that’s pretty challenging,” she said. “It has maybe been a barrier, and I’m actually working with some other local farm-to-school advocacy groups to try to learn about ways to work with local growers to get produce.”

The district recently reached an agreement that will allow the local Growing Power farm to supply vegetables for the district’s snack program, eventually working sunflower seed sprouts and pea shoots into sandwich wraps distributed in healthy vending machines, she said.

Growing seasons also can interfere with schools’ ability to provide fresh produce throughout the school year, said Klamert in Oconomowoc. But she still said she thinks schools can do more than they do.

This school year, she worked with local farmers to add potatoes and apples to school menus. Pomegranates and jicama were also served.

But one of the biggest changes has been adding a professional chef to the food service staff. That’s part of an initiative launched by Taher Inc., which manages the food service program at Oconomowoc as well as in the Muskego-Norway, Pewaukee and Oak Creek-Franklin school districts, Klamert said.

By having someone on site preparing food from scratch, the schools are able to experiment more with different types of food – including produce – and monitor their nutritional value.

Making sure they taste good also makes it more likely students will opt for the healthier choices over the always popular pizza, burgers and fries.

At $4 per meal, Shoemake’s dishes are a little more costly than the average $2.75 spent on other lunch products. Students say they’re worth it.

“A lot of the things he prepares look really delicious, and they’re definitely different from the normal school food, cafeteria-type food that you get,” Oconomowoc senior Bridgette Well said.

Although Shoemake is at Oconomowoc High School four times a week, he also spends one day per month at Nature Hill and Silver Lake intermediate schools, as well as University Lake School in Delafield. His favorite meal to prepare is fish tacos, because many of the students have never eaten them before. Pad Thai and a risotto bar are other favorites, both for him and the students.

“It does take a lot of labor, especially when we’re using lots of fresh produce, not everything’s coming out of a box,” Shoemake said. “But, in the end, it’s all worth it.”

Part 2 – The Next Generation Steps Forward in the Twin Cities