Blog - Latest News
You are here: Home1 / NewsNONE2 / News3 / Serving Up a Taste of a Different Culture 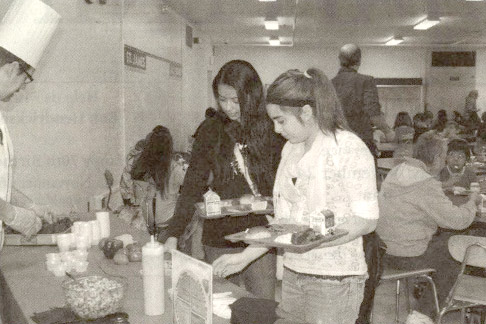 Chef Paul Booth made his annual appearance in district 840 Thursday, providing a sampling of Israeli cuisine in the St. James High School cafeteria during lunch.

Abby Grove, the school’s food services director, said Booth brings the cuisine of a different country each year, “and the kids love it, because they get to try something they wouldn’t normally get.”

Students gave the Tel Aviv Kabob bites with shawarma sauce excellent reviews, and they said the food was definitely unique.

“The meat was really good, and I liked the peppers,” he said. “I’ve never had a meatball quite like that.”

“It was really good, I liked the sauce, (and it was) very well-seasoned,” Espinoza said. “I like trying foods from different cultures to see what that’s like.”

Rodriguez called the cuisine “good and different,” and said she’s already been exposed to many different types of foods because, “My Dad likes to eat really weird things, like frog legs.”

Kathy Cedillo, a seventh-grader, praised the “good flavor that tasted kind of sweet,” while Haley Harbitz–also in seventh grade–enjoyed the sweet element but disliked “the mustard taste.”

Booth works for Taher, Inc., a food services company, and said, “They send me around to visit the schools, make some fun food, and cause a commotion by wearing a big, white hat.” He added that two main points of emphasis for the company are making meals from scratch and using local products.

“We try to use local farms for produce, turkeys, beef, etc., and we want to be at 80-90 percent from scratch within the next few years,” he said. “We’ll have to work harder in the kitchen, but food is so much better cooked from scratch.”

“It’s better for you, too,” he added. “There are way too many chemicals in foods for the sake of ‘convenience.'”

On Friday, he went into the school’s cooking classes to teach the students how to make pasta from scratch. “Most kids think (pasta) comes from the green box at the grocery store.”

Booth said he’s amazed and delighted by the popularity chefs now enjoy due to the proliferation of cooking shows on television and stations like the Food Network. 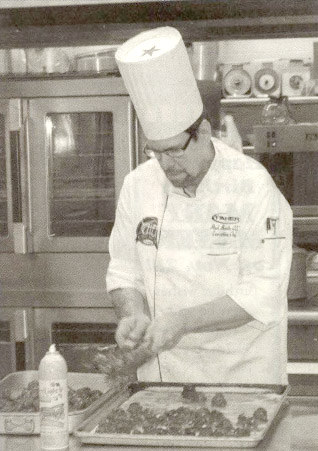 Before joining the Navy as a young man, he worked as a busboy-work he attempted to return to after leaving the Navy. But, that restaurant in Bloomington, Minn.-Eddie Webster’s–only had an opening in the kitchen.

“It was an old-school, landmark place, and I worked my way up the line there within a year,” he said. “I had the fever, and I’ve never left the kitchen.”

As part of his role on the chef’s council at Taher, Booth travels the globe to sample food from different countries and then brings the recipes back home. “I’ve been to 14 countries, and then I come back here to teach chefs how to make it.”

Each year he returns to the school, he brings a dish from the latest country–in this case, Israel.

“Our company has developed 20 recipes from Israel, and overall (the kabobs) have been everybody’s favorite,” he said. “It’s a ball of meat, and kids love protein, and it has lots of strong flavors in it, which chefs love.”

At the school, he said, “fresh pasta is always a big hit, but the kids were really receptive to sushi-they ripped into it.”

He said Thai food-sampled in Bangkok–is his personal favorite, he had “the best sushi in the world” at a tiny place across from the world’s largest fish market in Tokyo, and his favorite city to visit was Barcelona.

“In Barcelona, everyone is a ‘foodie,'” he said. “It’s the greatest thing in the world.”