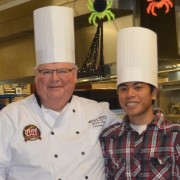 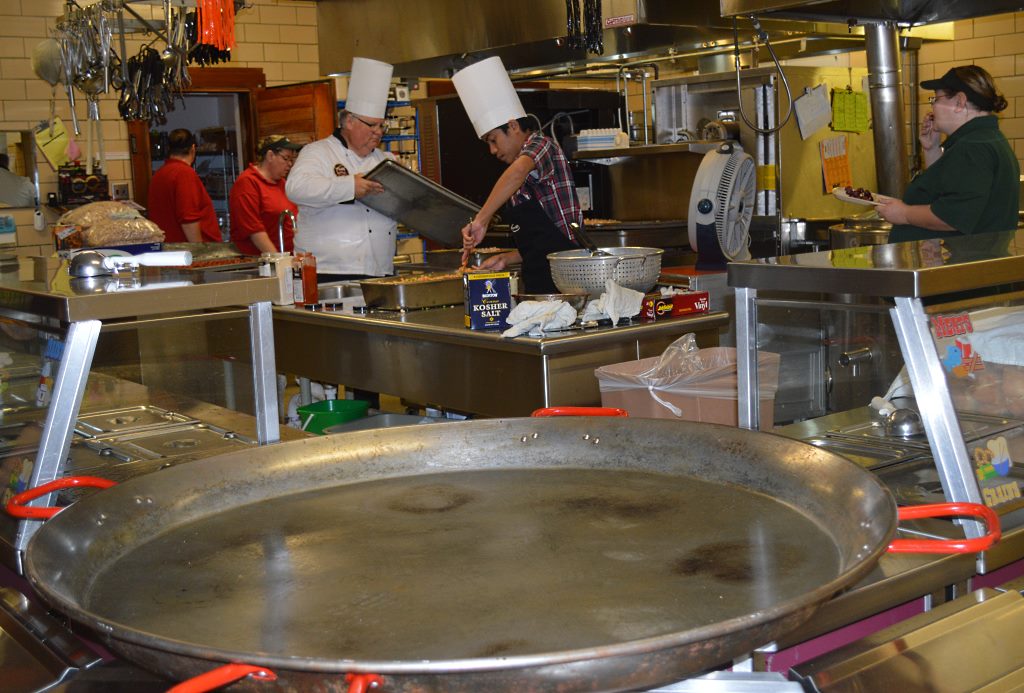 THE KITCHEN AT Mountain Lake Public School’s cafeteria is usually a beehive of activity as each day’s noon meal prep leads into the onslaught of hungry students. On Thursday, October 30, there was more action as Taher’s Corporate Chef Brian, at center left, was in the house to prepare the main dish – paella. Assisting him was Mountain Lake Public School senior Louis Louangthilath, center right. Staff bustling about include, Heidi Bergling, back left and Carol Kipfer, back right, as well as far right, Food Service Manager Tammy Wolle.

It was a meaningful – and delicious – job shadow experience for Mountain Lake Public High School (MLHS) senior Louis Louangthilath. Louis, who dreams of becoming a chef – and has plans to attend Le Cordon Bleu next fall following his high school spring graduation – was able to stand as assistant chef to Taher’s Corporate Chef Brian. Louis, who acknowledges that he enjoys cooking – especially for his family – was connected to this significant shadow opportunity by High School Counselor Martha Standerwick.

Thursday’s meal was what is considered to be the national dish of Spain, a rice dish – paella.

The basics of paella

Looking back into the history of paella, there can be found an an old story of how the Moorish kings’ servants created rice dishes by mixing the left-overs from royal banquets in large pots to take home. It is said by some that that word paella originates from the Arab word “baqiyah” meaning left-overs. However, linguists believe that the word paella comes from the name of the pan in which it is made – the Latin term, patella – a large, flat, open round steel pan with handles – on which offerings were made to the Gods.

The stories of servants creating dishes from the king’s left-overs are romantic, but we know for certain that it was not until the mid-nineteenth century that modern paella was created in an area around Albufera (a fresh water lagoon near the city of Valencia). At lunch time, workers in the fields would make the rice dish in a flat pan over a fire. They mixed in whatever they could find – such as snails and vegetables. For special occasions, rabbit and later chicken were added.

Today it is made in every region of Spain, using just about any kind of ingredient that goes well with rice. Actually, there as many recipe versions of paella as there are cooks. It may contain chicken, pork, shellfish, fish, eel, squid, snails, rabbit, beans, peas, artichokes or peppers.

Saffron, the spice that also turns the rice a wonderful golden color is an essential part of the dish.

The basics of Chef Brian

Chef Brian Renz of Eden Prairie has been in the hospitality industry for over 25 years, working for major hotel chains, catering houses and quaint delis. Prior to joining the Taher team in 1999 as the Food Service Director/Chef at St. Paul Academy and Summit School in St. Paul, Minnesota, Chef Brian worked as an executive chef at Marshall Field’s “Marketplace” concept, D’Amico & Sons, Mintahoe Hospitality Group, Carlson Hospitality Group and Marriott Group – among other well-respected organizations. He won the “Silver Spoon Award” from Restaurant Management in 1993 for his award-winning recipe. In 2000, Chef Brian received the “Outstanding New Food Service Director” award from Taher.

Chef Brian continues to teach elementary and middle school children the basics of cooking at St. Paul Academy and Summit School, and Minneapolis and Eden Prairie Public Schools. He also is a member of the Research Chefs Association, a professional hospitality group. 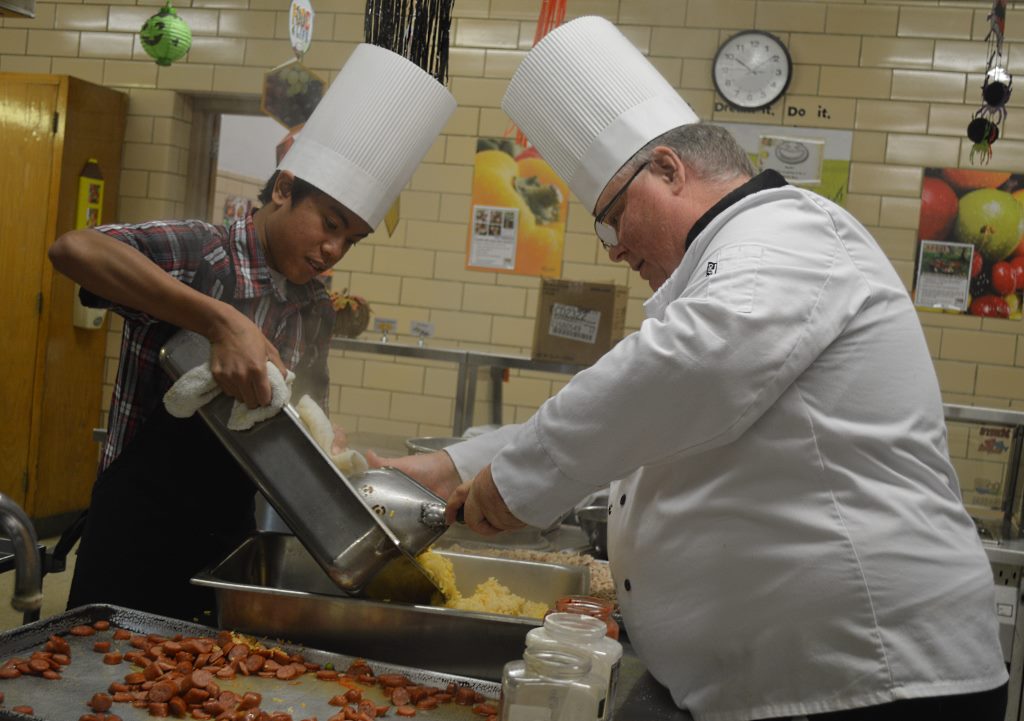 MLHS SENIOR LOUIS Louangthilath holds the pan as Chef Brian scoops out the hot rice, set to mixed with the remaining ingredients for the paella. Saffron, the spice that also turns the rice a wonderful golden color is an essential part of the dish. 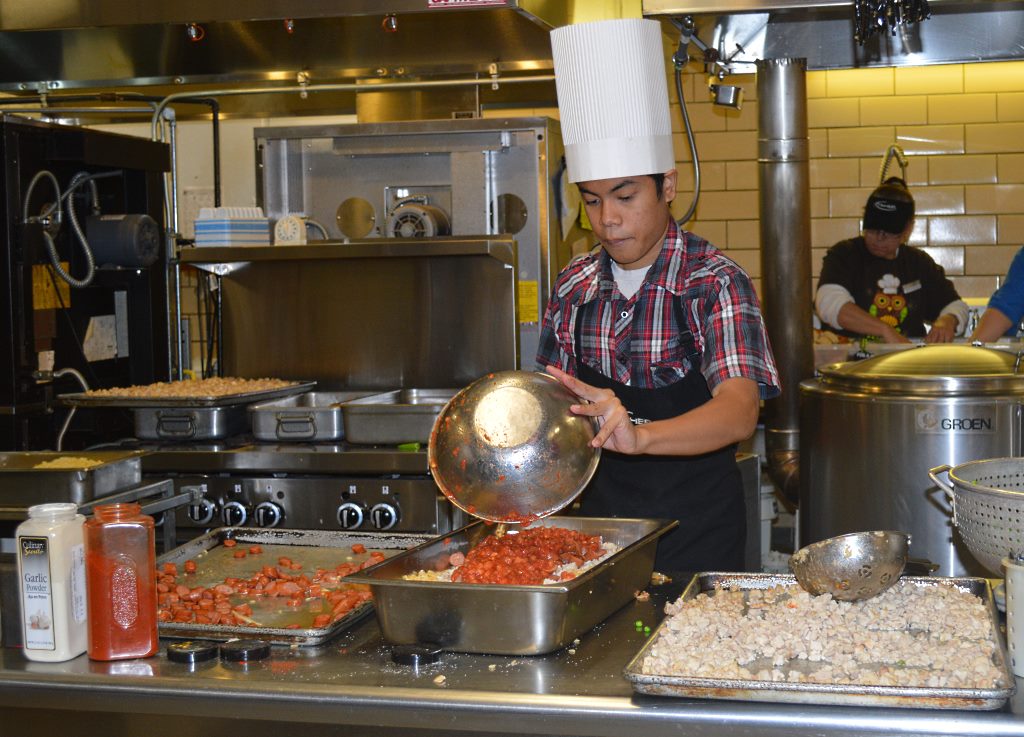 LOUIS WAS CENTER stage as he prepares this batch of paella. On one side is the chorizo sausage used in the mixture, on the other, cooked chicken breast. Add to that red and green peppers, veggies like cooked peas or pea pods – and seasonings. 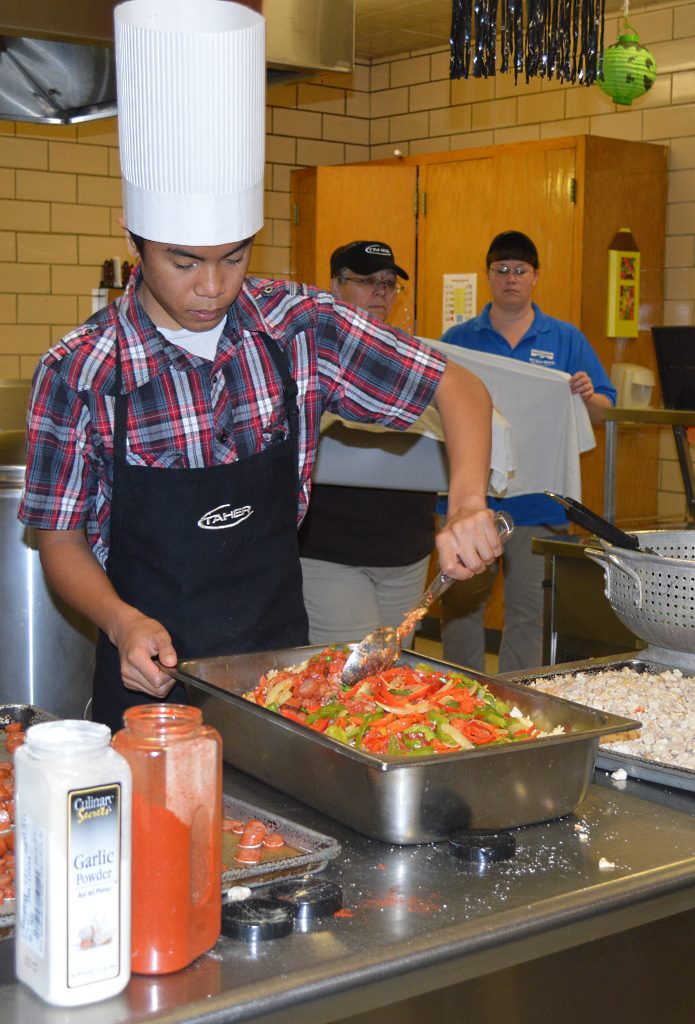 AND THEN MIX well. Observing Louis at back are kitchen staff, Sylvia Rodriguez, left, and Dawn Chapman, right. 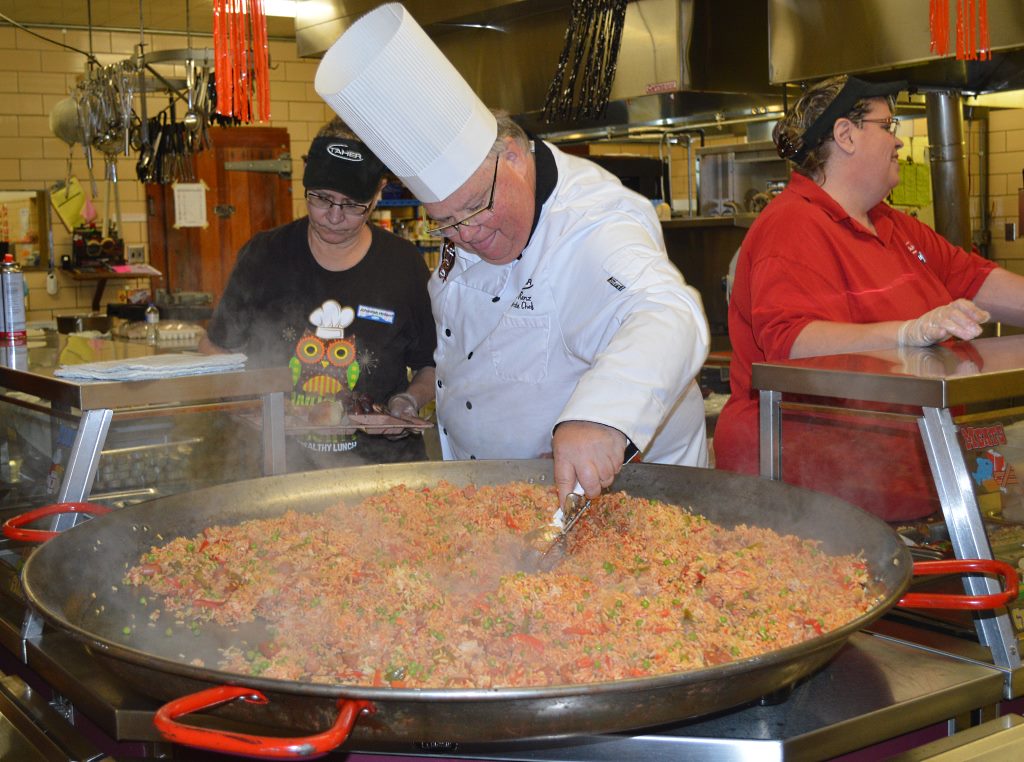 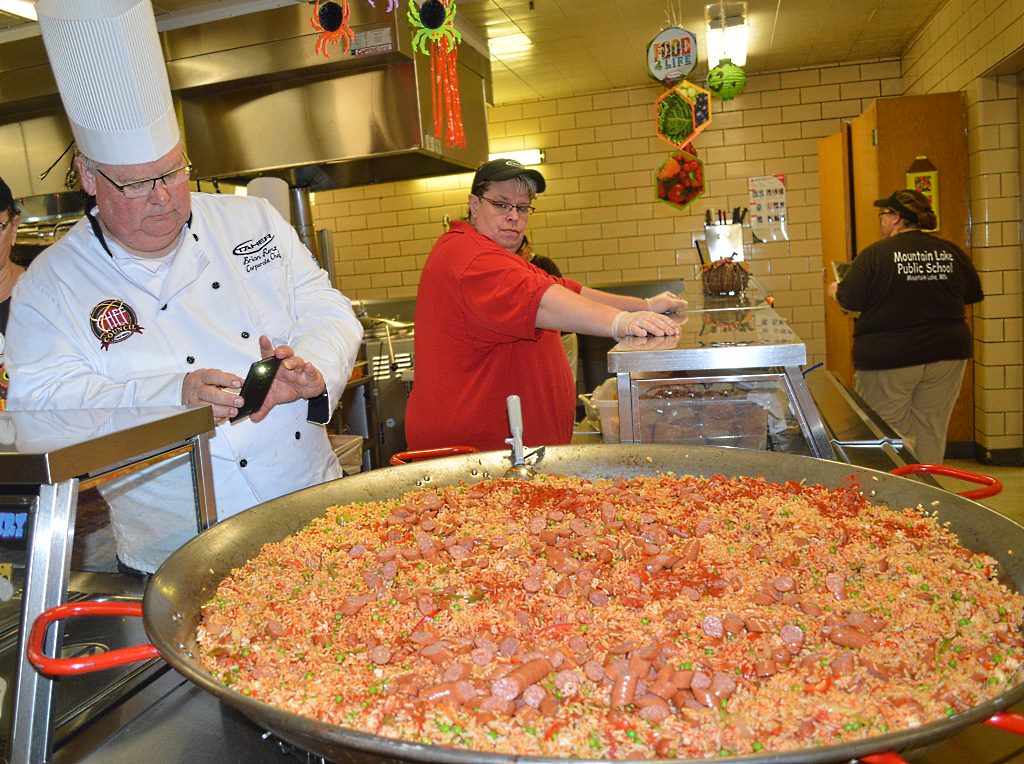 THE COMPLETED DISH is so tempting that Chef Brian snaps a quick photo to share on Facebook. Checking out the large plateful of paella is Carol Kipfer, right, of the kitchen staff. 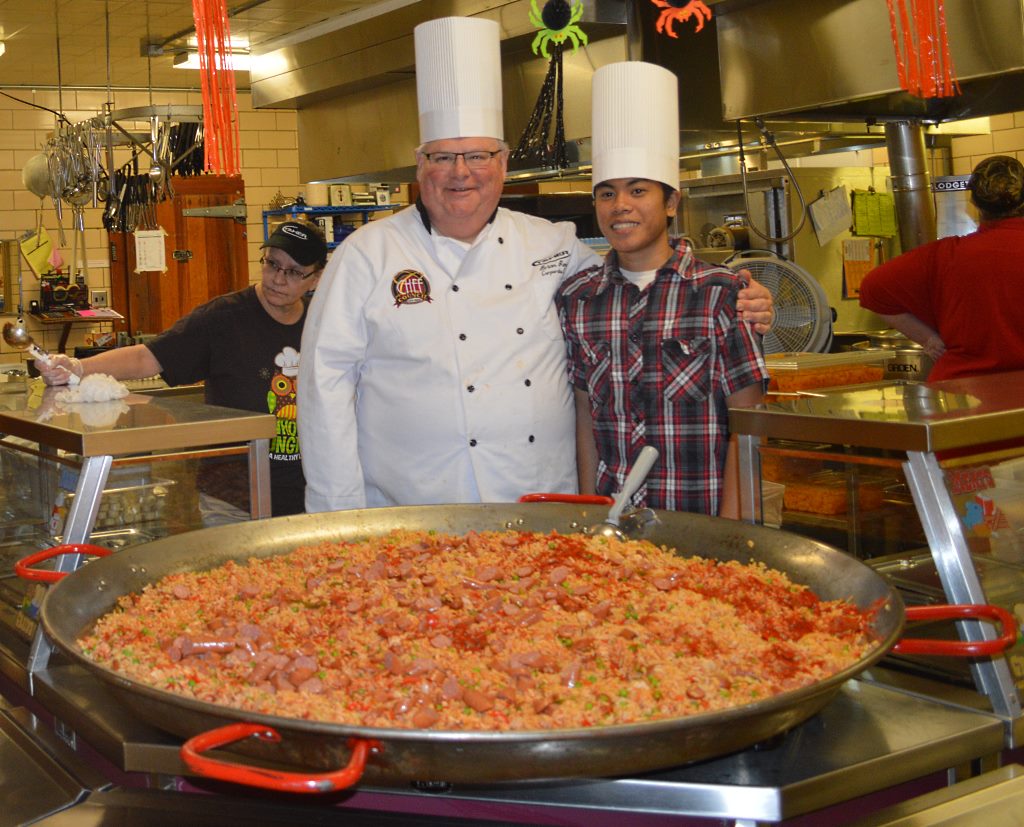 A PROUD MOMENT for the master chef and his prize student – Chef Brian and Louis Louangthilath – as well as their piece de resistance – the paella. 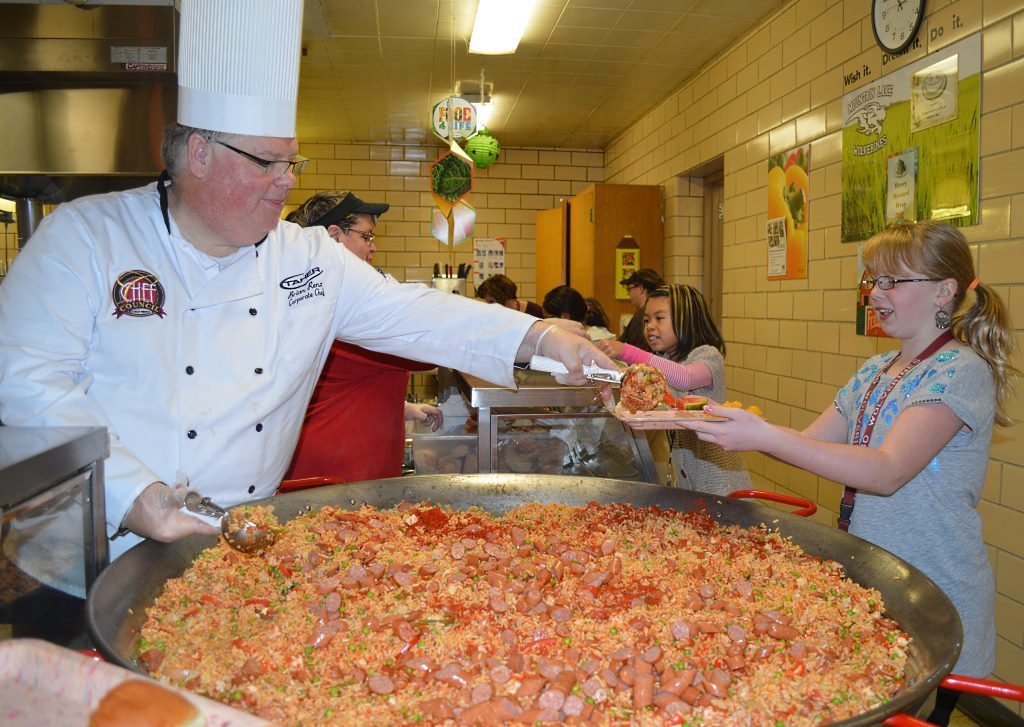 CHEF BRIAN SERVES up a scoopful of paella for Meesha Hoek. 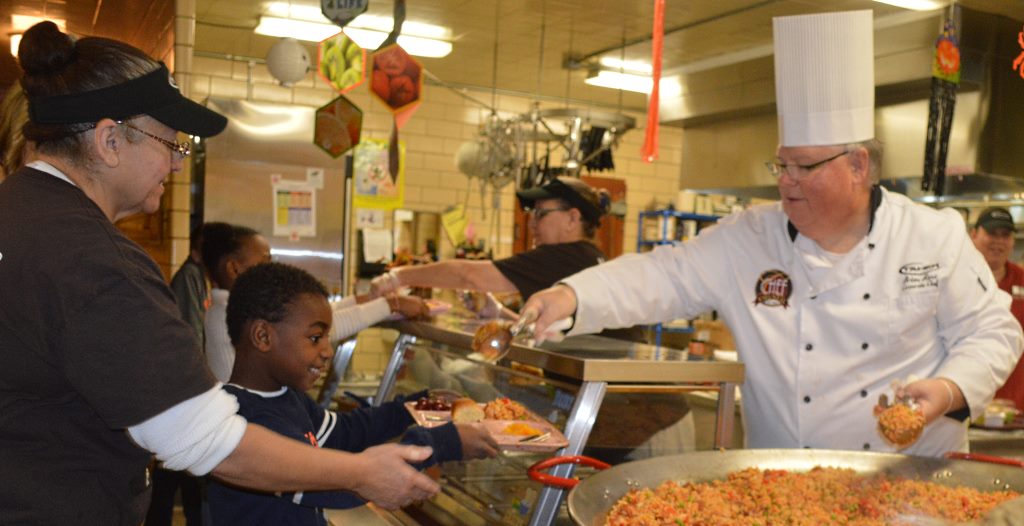 WORKING BOTH LUNCH lines, Chef Brian turns to dish up Sawyer Carrison’s serving, who is assisted by Sylvia Rodriguez of the kitchen staff. 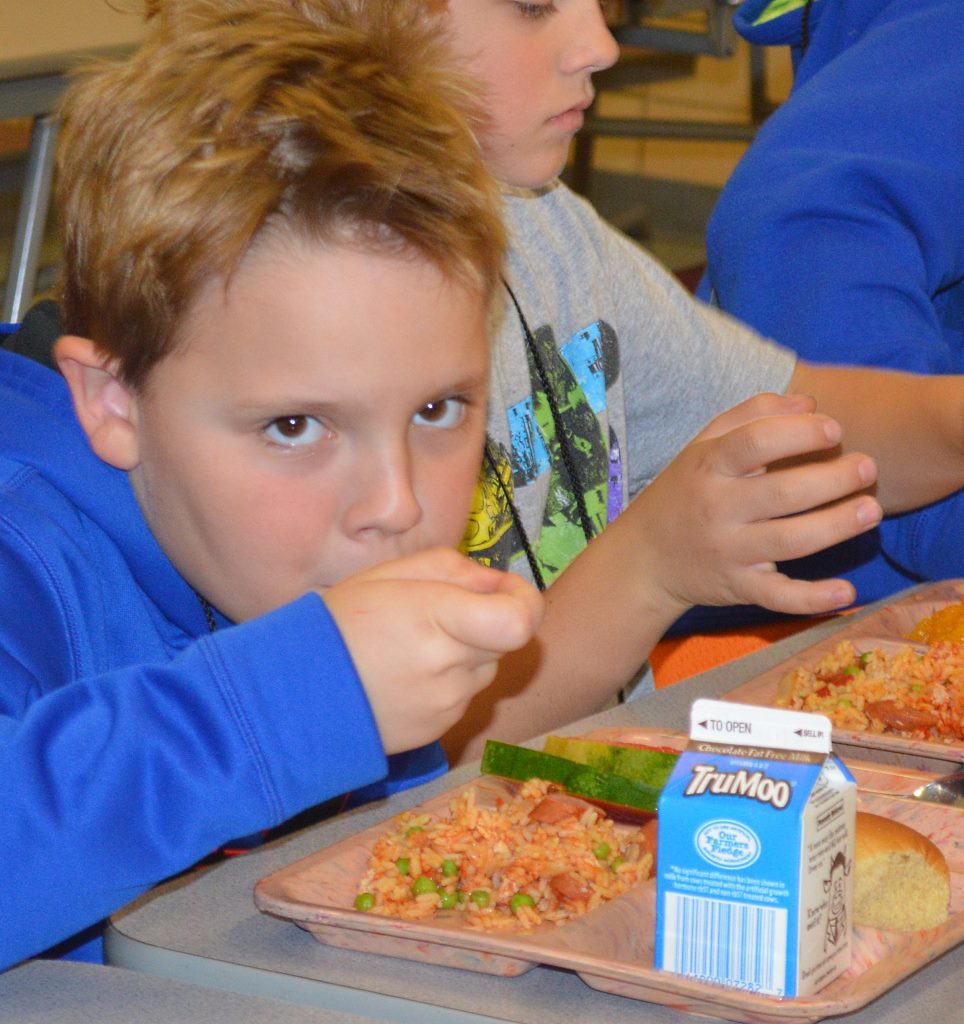 THE END RESULT was tasty – as Theo Evers demonstrates by shoveling in forkfuls of the Thursday noon meal’s main entree.