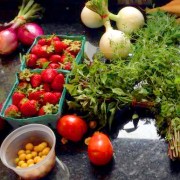 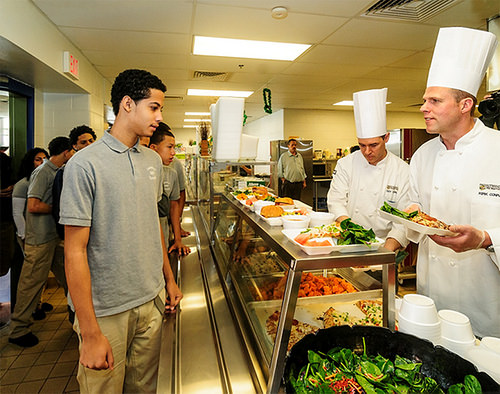 Burgers, nachos, fries and tacos aren’t the only items attracting coveted 18-34-year-old male consumers anymore, as young people increasingly drive consumption of fruits, vegetables and other fresh foods, according to The NPD Group.

The consumer research firm reported that consumption of fruit and vegetables, as well as fresh meat, poultry, fish and eggs, grew by 20 percent, to more than 100 billion eating occasions, between 2003 and 2013. While people ages 40 and older still eat more fresh food than those under 40 years old, the rate at which young people are switching to fresh foods is accelerating, and will continue to do so over the next five years, NPD projected in a report, “The Future of Eating: Who’s Eating What in 2018,” released this past summer.

NPD said fresh food eating occasions would increase another 5.9 percent by 2018, but would decrease among Baby Boomers as their numbers shrink. Meanwhile, Millennials, which NPD defines as people ages 24 to 37, would account for a 7.5-percent increase in fresh food consumption. Generation Z, those ages 23 and younger, would account for 11.1 percent of those occasions. 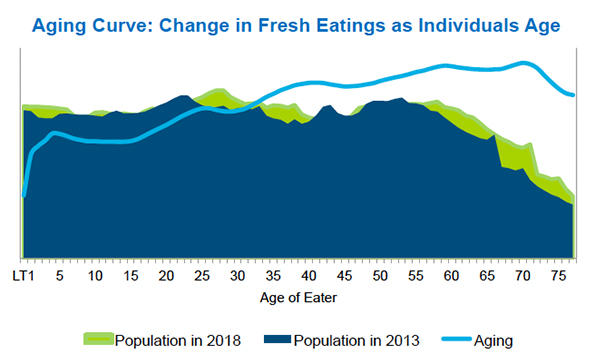 But it’s not all salads and smoothies for younger people. Top fresh foods among Generation Z include carrots, bananas and apples, but also bacon and hot dogs.

NPD defines “fresh foods” as fruits and vegetables, as well as refrigerated meats, processed meats — excluding frozen ones — and eggs.

“The additional prep and cooking that some fresh foods require isn’t an issue for Millennial [aged 24-37] and older Generation Z consumers who want more involvement in preparing their meals,” NPD said in a release.

Nonetheless, ready-to-eat items such as fresh fruit will be important factors in snacking, especially among young people who place value in foods they see as fresh or nutritious, even when trying to grab something on the go, NPD said.

However, older people are less interested in organic foods.

“Economic pressures, plus the idea that ‘it’s too late for me,’ may be contributing to the reduced interest among older generations,” the report said.

“Generation Z and Millennials are driving changes in this country’s eating behaviors with their approach to food choice and preparation,” NPD food and beverage industry analyst Darren Seifer said in the release. “Foods on the store’s perimeter will benefit from this increasing interest in fresh, and manufacturers of center of store items and retailers can take advantage of the ‘fresh’ trend by considering innovative ways to link their products to fresh foods.“