Blog - Latest News
You are here: Home1 / NewsNONE2 / News3 / Part 1 – The Next Generation Steps Forward in the Twin Cities 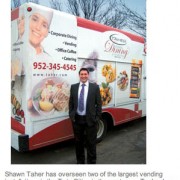 Bruce Taher has always been a foodservice visionary. When he left Interstate United Corp. in 1981 (a few years before that company merged with Canteen Corp.) to launch his own foodservice business, he saw his future in onsite foodservice. Having worked for one of the nation’s largest foodservice contractors, he knew the importance of fresh food to corporate, institutional and educational accounts. And he knew the quality control procedures needed to deliver fresh food consistently.

An Iranian immigrant who started his foodservice career as a dishwasher, Taher parlayed the expertise he gained at Interstate United into the 24th largest foodservice management company in the country, according to Food Management Magazine’s 2008 list of top 50 companies. While his responsibilities at Interstate United had included vending, Taher saw a bigger future in onsite foodservice. It is an industry in which customers base decisions on quality performance and reward contractors accordingly.

Vending, by contrast, was in need of repositioning. Taher believed in 1981 that vending’s better days were behind it, due to the decline of cold cup machines and the inability of hot beverage machines to match automatic drip coffeemakers’ coffee quality. To position himself as a foodservice leader, he focused on onsite

foodservice when he left his district manager position at Interstate United to launch his own company.

Taher began his foodservice company with three employees and one account, a skilled nursing home. He quickly expanded into school foodservice, and for the first 18 years, he prepared all food at the locations.

In 1999, he built a commissary, which took the company into corporate foodservice and accelerated its growth. School foodservice is currently far and away the company’s largest division, serving 11 states in the Upper Midwest.

VENDING: A RETURN TO HIS ROOTS

But nearly 30 years after starting the company, Taher’s vision includes vending once again. He believes the products and technology currently available have given the vending industry the opportunity to reclaim and surpass its former relevance.

“On one hand, we anticipate to diversify our product lines by offering some non-traditional selections through our candy/chips machine, improve and expand our coffee selections, continue to dispense fresh-made food selections from our own commissaries, and expand our technology to allow for wireless options, credit cards, discounting, etc.” Taher said. “As for cold beverages, we are at the brinks of watching a new generation of energy drink consumers who are more into the contents and nutrients versus the traditional soft drinks with an ingredient list designed to satisfy the FDA and not the consumer.”

Directing Taher’s vending division is his 28-year-old son, Shawn Taher, the company vice president. Shawn Taher has overseen the company’s vending operation in recent years. In the past year, the company won two of the Twin Cities’ largest vending contracts: Honeywell and the University of Minnesota.

The younger Taher had just joined the company full-time when his dad began paying closer attention to vending’s emerging capabilities in 2002.

The company began its vending division in 1998 with one route after winning a college foodservice account that included vending. The elder Taher realized it made sense to offer vending in conjunction with onsite foodservice.

This was a fortuitous time to expand into vending, as one of the largest independents in the Twin Cities was acquired by one of the nationals.

The company’s growth has allowed it to maintain its profitability during the recession.

Shawn Taher at the time had already worked in various positions in the company after earning an undergraduate degree at the University of Minnesota. He took on vending sales as one of his main responsibilities.

The company already had a good reputation in foodservice that could give it leverage in the vending market. An in-house marketing and graphics department was another advantage.

Part 4 – The Next Generation Steps Forward in the Twin Cities