Blog - Latest News
You are here: Home1 / NewsNONE2 / News3 / Part 4 – The Next Generation Steps Forward in the Twin Cities 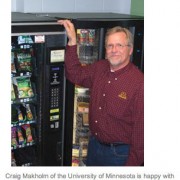 The vending division passed a milestone this past year by winning two of the largest vending accounts in the Twin Cities: The University of Minnesota (with 60,000 students) and Honeywell. Both accounts were

previously served by one of the national vending/foodservice operations.

The culinary center played a key role in winning these accounts.

The university bid involved a series of meetings. Shawn Taher noted that one unusual request was that the university wanted to be at the top of Taher’s list of customer references.

The university awarded Taher the non-beverage vending account for its three campuses. This 10-year contract with 3-year extensions was awarded based on a request for proposal, which stipulated nutrition guidelines (mandating 25 percent of the choices be nutritious) and a commission.

The contract required the installation of 244 machines in 140 locations, of which 135 are snack machines and the rest are food and dairy machines.

Since he realized the contract required a major upfront investment, Shawn Taher decided that it was a good opportunity to introduce some new vending concepts. He decided to introduce 4-by-5-inch video touchscreens, a new innovation developed by Vendors Exchange International Inc. (VEII), on the snack machines. The touchscreens display nutrition information on all the products in the machines. The screens were not part of the original proposal, but the university has been impressed with it.

Taher also ordered LED lights for the snack machines, which provide superior illumination and saves energy. He also made sure the machines have $1 and $5 bill acceptors, something the university’s previous vending operator did not provide, and dollar coin payout.

“It allowed us to put on some things that we would not otherwise been able to do,” Taher said of the university contract. “Part of my issue with vending is it’s the same black box.” He saw the video screens at a trade show last year and visited VEII to learn more about them.

“It opens the door for so much opportunity down the road,” Taher said of the video touchscreens. He anticipates using the screens to promote his company’s restaurants, as well as university events. “Software can be written to do anything you want it to do,” he said.

Taher ordered used snack machines, which VEII retrofitted with the LED lights and the video touchscreens. VEII also provided the product nutrition data and images on memory cards, which Taher inserted into VEII’s universal control board in the machine. VEII sent one of its technicians to Minneapolis to assist in the installation.

The university installation represents close to a $1 million investment, Taher said. It required a lot of planning, including the need for extra labor and extra warehouse space. “In retrospect, it was a lot of stress, but a lot of fun,” he said. “I challenge anybody to find a team of people on their vending staff that’s never had a major account that can put that amount of equipment in that amount of time and do it with no major problem.”

The video screen, located just above the keypad, displays the Taher logo and text inviting the customer to touch it to activate purchasing instructions. Once it’s touched, instructional text prompts the customer through a process of pressing the buttons for the desired product. The screen then displays the manufacturer’s logo and nutrition panel for the selected product.

Craig Makholm, an officer for the university’s contract administration, said the contract mandated more nutritional requirements and more energy efficient equipment. When asked what about Taher’s proposal won the contract, Makholm said the local commissary was the major difference, along with a higher commission.

Makholm, who worked for a local vending operation before moving to the university several years ago, said Taher’s wellness products bode well for vending sales. He said the consumer’s growing interest in healthy, organic and sustainable products in recent years has been a challenge for vending. The increase in branded retail foodservice outlets has also hurt vending sales in the last several years.

Shawn Taher said he thinks the recession might actually be helping vending sales since the values are superior to many of the retail food offerings on campus. “I actually think the recession is a bit of a positive for the vending business,” he noted. “You can still go to eat (from the vending machine) for $3.”

The Tahers believe that it is important to continue to explore new concepts in vending in order to bring new value to the purchasing experience. To date, some of these concepts have given the company plenty of things to talk about other than price and commission.