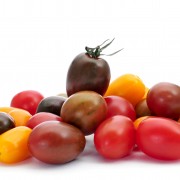 You can find more than 100 varieties of cherry and grape tomatoes growing in gardens, at farmers markets and at grocery stores.

They have names like Jolly Elf, Indigo Rose, Orange Fizz, Baby Cakes and Cherry Buzz. They come in stop-sign red, deep ruby, golden yellow, chocolate brown and pale orange. They can look like a big gum ball or a plump olive.

They are some of the more than 100 varieties of cherry and grape tomatoes that can be found on a list compiled by the Rutgers New Jersey Agricultural Experiment Station (njaes.rutgers.edu/tomato-varieties).

You may also find them growing in gardens, at farmers markets and at grocery stores, for apparently we have a soft spot for these tiny cousins of beefsteak and plum tomatoes. 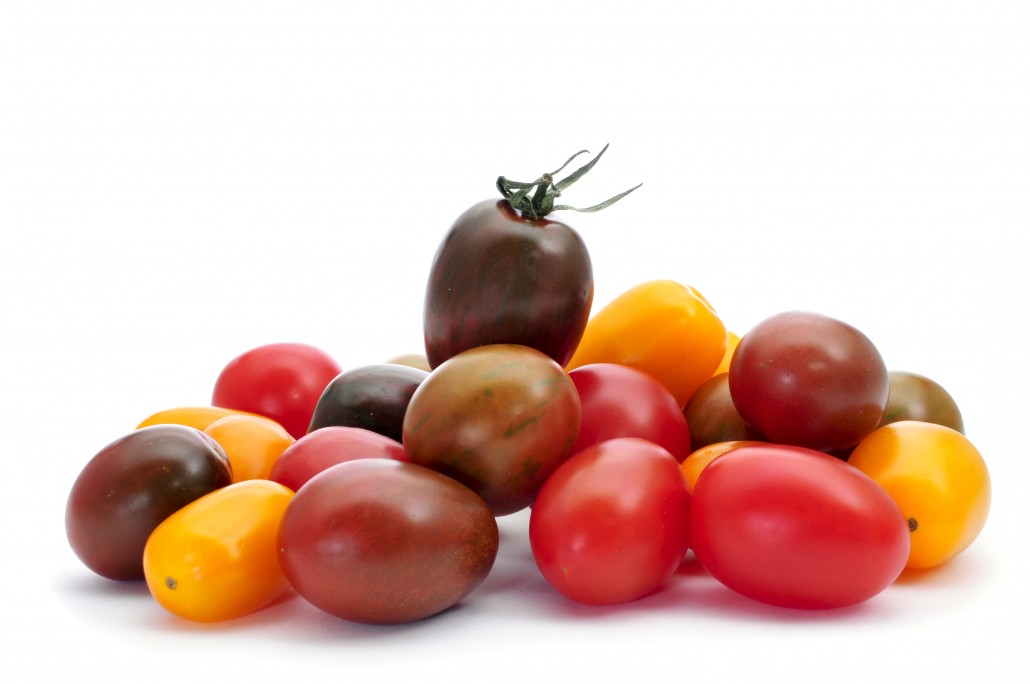 “People are attracted to small-fruited tomatoes due to the wide reputation they have for extra sweetness and probably subacid tartness compared to other tomatoes,” says Jack Rabin, of the Rutgers Agricultural Experiment Station.

Cherry tomatoes, round and looking like, well, cherries, are similar to tomatoes people munched five-plus centuries ago.

“All the earliest tomatoes were tiny little yellow and red and green things that would have been looking like today’s cherry tomato,” says Rabin.

The elongated grape tomato (yes, it looks like a grape or olive) arrived in this country in a big way in 1997 thanks to large-scale commercial availability.

Their popularity has prompted retailers to give them more shelf space and offer more varieties, says Rabin. But what are shoppers to do if they can’t tell a Sweet Olive from an Indigo Rose?

In other words, a farmer may care when a particular variety matures. The consumer? Probably taste, maybe color, maybe portability, maybe lower acidity.

And while people were creating yellow varieties with low acidity 20 years ago, today it’s a different story, he says.

“People are creating full acid and low acid in all colors, so it’s actually impossible in our time today to generalize that a yellow tomato will be a subacid tomato. You have to buy them and eat them and make your own judgment.”

Tasting lots of cherry and grape tomatoes, in fact, may be the best way to find out what appeals to you.

Because tomato varieties and flavors change throughout a growing season, it helps to chat with the farmers at your market. And since some grocery stores have a buy-local program, as a spokeswoman for the U.S. Department of Agriculture points out, you may be able to purchase a tomato that has grown on the vine longer than those shipped from farther away.

“Don’t be afraid to talk to someone at the farmers market or in your grocery store and ask them if you can taste and sample,” says the spokeswoman.

“Look for tomatoes that are firm and a full color for the particular variety,” she adds. “You want them free of any bruising, any blemishes, any softness, any decay. Generally you want them to feel heavy for their size since they’re more likely to be nice and full and juicy.”

Then pick up the container and sniff. “An important thing for tomatoes is the smell — not so much that it smells good (but) because I can’t pick out the individual ones so easily when I’m buying that pint or quart basket, I’m smelling for any off odors” the spokeswoman says. “I don’t want to smell musty or moldy. Different types of decays might also have a fishy smell or a vinegary smell.”

“The reason is that the No. 1 cause of disappointing tomato flavor is cold refrigeration below 55 degrees between the time it leaves the farm and the time that it enters your mouth,” says Rabin.

So those small tomatoes cold packaged on a deli tray with celery and carrots or other ingredients “are likely to be disappointing.”

The farmers market is “a totally different environment because the tomatoes were likely not refrigerated after they left the farm, and they’re likely to be more ripe when they were harvested and likely to be more consistent,” Rabin adds. 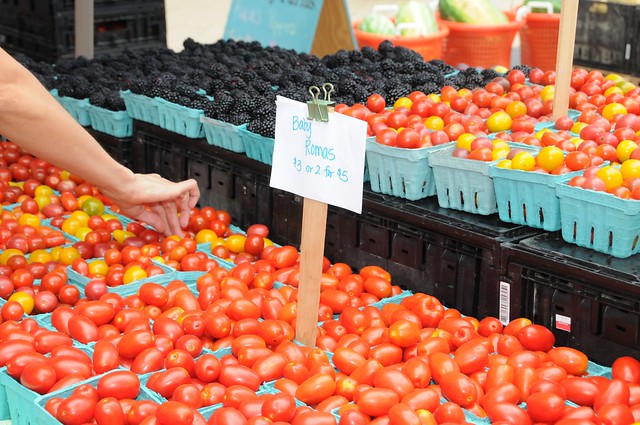 “Look at them, smell them — touch them if the vendor allows you to touch them — do a little taste test.”

At Mark’s Farm Market and Greenhouse in LaPorte, Ind., where more than 10 varieties of grape and cherry tomatoes are grown, Kaleena Mark always eats them raw. “You can mix them in with your sauces if you want,” Mark says. “They’re just a little hard to try to cut and prepare. So I usually just toss them in my salads or put them in with my bruschetta.”