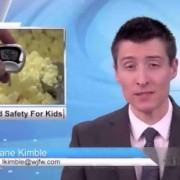 RHINELANDER – The CDC estimates that each year roughly one in six Americans gets sick from foodborne illnesses.

The elderly and the young are most at risk.

Food safety is a top priority in the Rhinelander Schools District.

Pat Karaba has an awesome responsibility. She runs the food program at Rhinelander High School that feeds hundreds of students and teachers every day.

Jodi McKinney and Todd Troskey are Oneida County Health Department’s Registered Sanitarians in charge of inspecting the work Pat and her team do.

“We inspect the school actually twice per year,” saysTroskey.

On the surface, Jodi and Todd’s job may seem objective: Check a bunch of boxes yes or no on a control form, give feedback, and follow up.

While that perception has some truth to it, in reality there job is much more than that, and they know it.

“When we come into an inspection, if we find something that is occurring in the kitchen, we immediately stop the process of what could be happening,” says McKinney.

In 2006, the State of Wisconsin relinquished control of food safety inspections in Oneida County to the Oneida County Health Department.

Since then, the agency has set out to develop professional relationships with its clients.

None of those relationships can be more obvious than the unique relationship formed between the Health Department, Pat and her team.

“It becomes a relationship more now that they are more accessible any time of the day, and they know that we are also at that point,” says Karaba. “It seems more like teamwork than a distance kind of situation.”

The challenges the teams face to ensure food safety for the students are substantial.

“We are proud of what we do and also knowing that Jodi and Todd are there for us and if we don’t, they are there to help us develop that part of the plan that may be a weak spot in the program,” says Karaba.

The team believes that answering the whys behind the questions helps her clients buy in.

That buy-in is then used to deliver results.

“If we don’t provide reasons behind the requirements the Health Department has, we won’t get effective compliance with the food workers,” says McKinney.

The process is working.

“Based on everything that she is doing, there is limited risk,” Troskey says.

“One of the things we noticed with the Rhinelander School District is Pat has a definite presence in all of the schools,” McKinney says. “She’s going to the facilities, working with her employees, and giving them the skills and abilities to achieve food safety within the schools.”

Pat will tell you that titles are given, but respect is earned.

When asked what she’s most proud of, her answer shouldn’t surprise you.

“Our sanitation record. We have done a real fine job, and I can’t say me. It’s a team here.”

The Only Prescription For This ‘Fever’ Is… The LIMBO!
Scroll to top