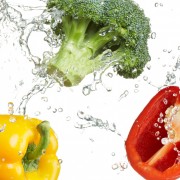 School nutrition workers identified compliance with federal rules regarding nutrition and competitive foods, cost, and participation among the “most pressing issues” for meal programs in a survey released by the School Nutrition Association this week.

These concerns are in line with what the School Nutrition Association has been saying for months. New meal patterns and nutrition rules created as a result of the Healthy Hunger-Free Kids Act of 2010 require schools to restrict levels of calories, fats, and sodium while also serving more fruits, vegetables, and whole grains. Many schools are worried that the bumps in implementation of the rules—such as finding compliant foods that are tasty to students—have spurred declining participation in their lunch and breakfast programs, the SNA has said. And, while about 90 percent of schools have reported compliance with the rules, many of them are struggling with revenue, student acceptance of new foods, and plate waste, the organization says.

Competitive-food regulations, which went into effect July, set first-of-their-kind nutrition rules for all foods offered at school, even outside of the lunch line. That means many unhealthy revenue boosters and fundraising staples that schools have offered on a la carte lines, in vending machines, and through fundraisers are no longer allowed. How much revenue could schools stand to lose if kids don’t want to buy the new, healthy options? Of the survey respondents, 92 percent said they had competitive food sales. Those districts report that an average of 17.8 percent of their food-service budgets comes from competitive food sales. And 16.1 percent of districts reported that more than 30 percent of their food-service budgets come from competitive foods.

So, do schools want to offer healthy food?

Yes. The SNA says it supports most of the regulations, but it wants greater flexibility in implementing them. And survey respondents said they were trying or planned to try a variety of things to encourage healthy eating among students. Here’s a chart I pulled from the report: 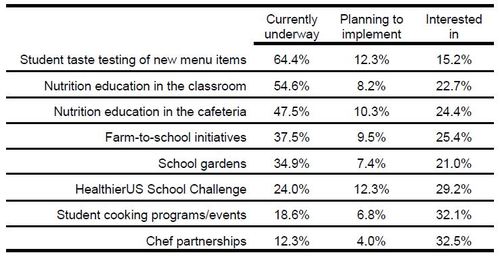 Anything surprising in the report?

I clearly haven’t visited enough school cafeterias lately because I was surprised at the variety of foods schools are offering students. The survey included a question about ethnic foods. Unsurprisingly, large numbers of respondents said they’re offering Mexican food to students, but many also reported serving things like Indian and Greek. 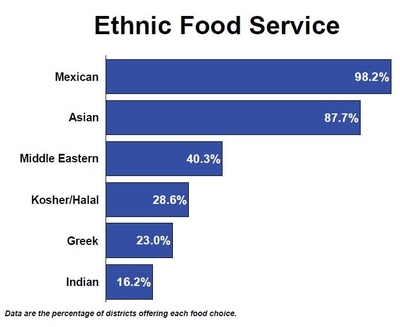 Getting Kids to Eat Vegetables