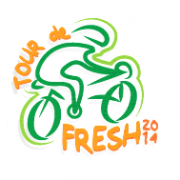 JACKSON, MI – Clunk. An apple hits the bottom of a garbage can at the end of a cafeteria serving line.

Brant Russell, Jackson Public Schools Food Service Director heard that noise often. The United States Department of Agriculture requires students to take a serving of fruit or vegetables at lunch, but they often are reluctant to eat it.

However, a district-wide introduction of fruit, vegetable and salad bars four years ago upped produce consumption and reduced the number of clunks, Russell said.

Students no longer are stuck with what is given to them — they have choices.

“Now we offer three vegetables, two fruits every day. So in that mix, you should be able to find something that you like or are at least familiar with,” said Russell.

To subsidize the cost of nine produce bars that will primarily replace the district’s aging equipment, Brock Nemecek is participating in a 275-mile bike race along California’s coast from Carmel to Anaheim.

The Tour de Fresh race, sponsored by members of the fresh produce industry, has more than 40 riders raising money to place salad bars in schools through the Let’s Move Salad Bars to Schools campaign.

Organizations such as the National Fruit and Vegetable Alliance and United Fresh Produce Association created the campaign in response to First Lady Michelle Obama’s Let’s Move initiative. Let’s Move Salad Bars to Schools aims to give every child in the nation access to fresh produce.

In support of that mission, each Tour de Fresh rider has a fundraising goal of $3,000 — the cost of one salad bar and accompanying utensils. Nemecek raised about $500 so far but said some riders have far exceeded that amount. Extra funds will cover any deficits, ensuring that every school the event sponsors is provided for.

From a list of more than 800 schools, Nemecek chose to sponsor Jackson Public Schools. As he grew up in a small Texas town, Nemecek connected with a photo he found online of sleepy downtown Jackson.

Nemecek, a fruit and veggie connoisseur and account manager at a marketing agency that serves clients in the fresh produce industry, is enthusiastic about racing for Jackson students. He believes salad bars have significant benefits.

To Russell, that is especially true in the Jackson school district, which has many low-income families. For some children, a school lunch may be the only balanced meal they eat all day.

According to data from the Center for Educational Performance and Information, 69 percent of students in the district qualify for free or reduced lunches through the federally funded National School Lunch Program.

To fill in gaps — in both food consumption and exposure — Jackson Public Schools introduces students to a variety of produce.

Posting fliers in cafeterias with facts about new produce and holding fruit and vegetable tastings like the one on Thursday, June 05, are part of the educational effort.

Andrew Marshall, an intermediary between produce companies and schools for Let’s Move Salad Bars to Schools, said there is currently an influx of salad bar applications from Michigan. Since the initiative launched in 2010, it has granted 3,456 salad bars to 1,097 school districts nationwide.

Implementing salad bars can take up to a year, according to information on the campaign’s website. Unless schools participate in fundraising, they must wait until their salad bars are fully paid for by donations to the campaign.

Russell submitted his application at the end of March, but hasn’t heard from Let’s Move Salad Bars to Schools recently. He hopes to have salad bar equipment soon and continue his department’s efforts to keep healthful food on students’ trays and out of the trash.

Elementary students expand their palates at fruit and vegetable tasting!