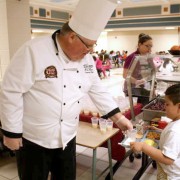 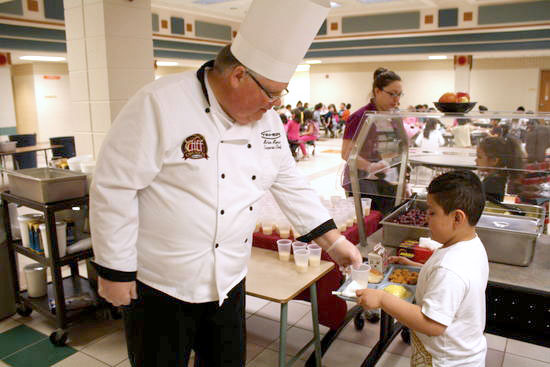 Taher Corporate Chef Brian Renz serves healthy smoothies to the children during lunch to see if the smoothie recipe is something they could integrate into the menu for either breakfast or lunch. / Photo by April Allen

In recent years since Michelle Obama started the healthy initiative in the school system the companies that supply food to the school system have stepped up their game. Offering new ideas and samples for kids to try.

At Storm Lake Elementary a corporate chef from Taher brought in his special smoothie recipe for the kids to give a try.

“It brings excitement to try something new,” says Brian Renz, a corporate chef with Taher, the food production team that is contracted with Storm Lake Elementary.

A few kids were more than happy to express their gratitude. One little girl told Renz, “I love it! I can taste the apple sauce.” Another little girl said, “When I grow up I want to be just like you.”

If students like the smoothies it could be something added to the lunch menu or even the breakfast menu.

“This coincides with the new federal Kid’s Act with different portions and controls including a fruit and vegetable bar. The smoothie is an option, just a little extra to see if kids like it. If they do maybe we can offer it more often,” Renz explained.

The smoothie was a sample added on to what they offer everyday as required by the law that includes a vegetable and fruit bar.

Renz believes the children get excited when they see a man with a white coat and a hat. This makes students “more willing to try” new recipes. They served nearly 800 cups of the smoothie mix.

Renz is one of the many chefs from corporate that travels to other countries every few years to learn about new recipes and styles of cooking. Once the chefs return they put together new recipe ideas and menu items to be sampled at the schools. Their most recent travels were to Israel where they learned about a gyro recipe.

Earlier this week they brought what he called “turkey shawrma” to the middle and high school. This was similar to a gyro, but instead of being made with lamb it was made with turkey, something more familiar to Americans.

“It looked like a hot turkey sandwich so they were willing to eat it and try it,” comments Renz.

Students in the Kreative Kitchen class at the high school helped marinate the meat, and Renz adds, “they did a great job.”

They thought they would serve 300 at the middle school and 300 at the high school. By the end of the lunch hour they had served at least 330 of the turkey shawrmas at each school, if not more.

Taher works in 19 states and has a group of chefs that include Renz that have designated areas to implement new foods and recipes. Renz has been going to Storm Lake for nearly 6 years now.

To build the sandwich: