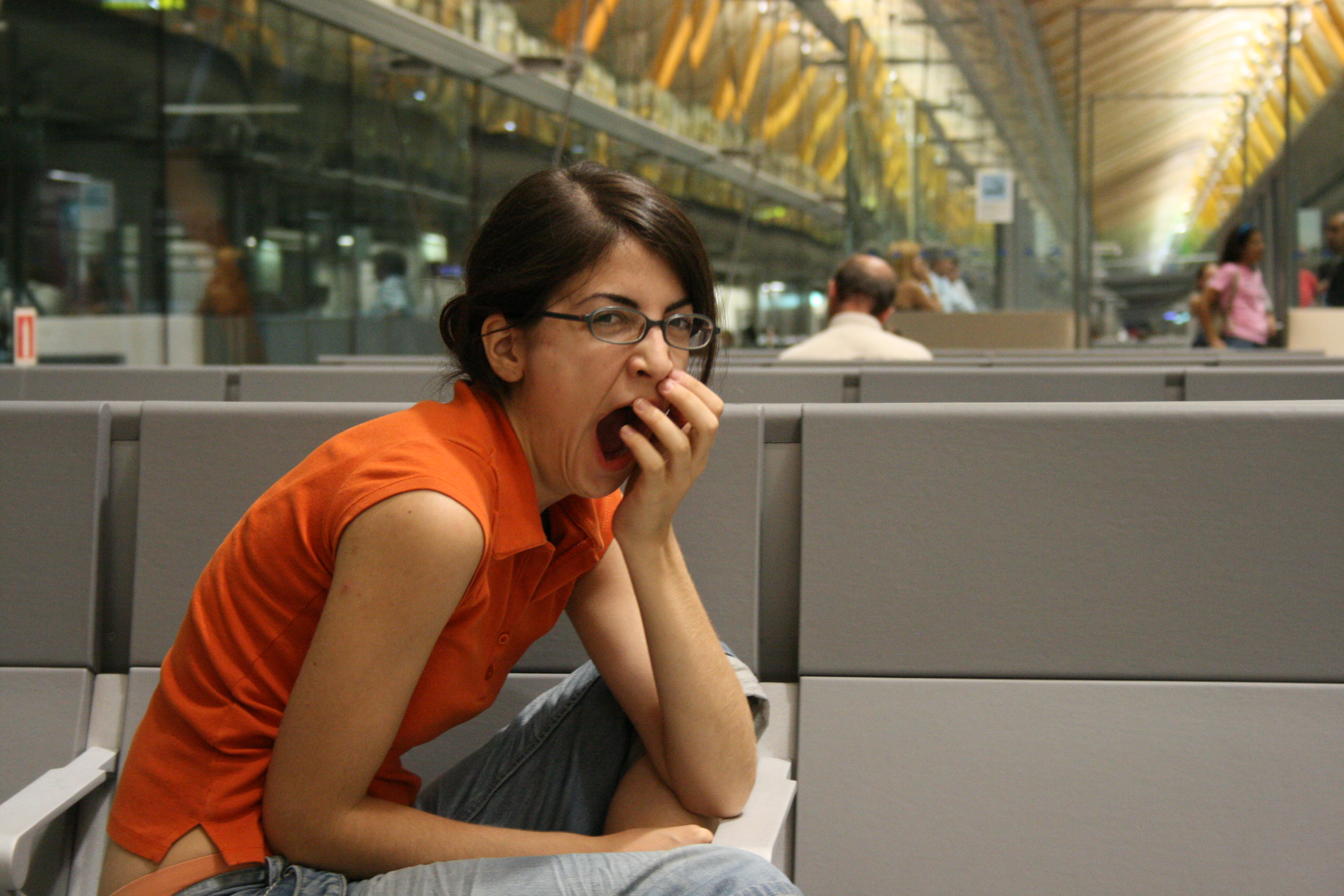 What happens when we don’t sleep enough?

There’s no question that sleep deprivation is an American epidemic, with a third of the country getting less shut-eye than the recommended 7 to 9 hours per night, according to recent research from the Centers for Disease Control. And it’s not like this an old thing: “The average adult is getting one and a half hours less of sleep per night than the average adult did 100 years ago,” Yelena Pyatkevich, M.D., director of the neurology clerkship and associate director of sleep disorders at Boston Medical Center, tells SELF.

And since all it takes is shaving one hour off of the recommended sleep time per night to cause a slew of health problems—never mind a prolonged period of insomnia—we checked in with Dr. Pyatkevich and Dianne Augelli, M.D., a sleep expert at New York Presbyterian Hospital and Weill Cornell Medicine in New York City to find out what happens when we’re less than rested than we should be.

The effects of poor sleep on cognition, memory, learning and processing can be seen with just one night of tossing and turning, says Augelli. “We need sleep as a part of memory consolidation and learning, so when you don’t get enough sleep—even for one night—that’s impaired,” Augelli tells SELF. Keep in mind this effect is short term, meaning if you spend a few nights getting back into the swing of things your brain’s executive functions will return to normal.

Spending one night entirely without sleep will make you feel drunk—and your brain behaves actually if it is drunk, says Pyatkevich. In fact, 24 hours without sleep equals the equivalent of a blood alcohol level of 0.1 percent, which means you’re more than legally drunk. (I shudder to think about the all-nighters I pulled before finals in college now.) That makes it particularly unnerving to think about all the doctors pulling daylong shifts. A January 2016 study published in the Journal of Medical Decision Making found that pediatric residents, whose shifts can run between 24 to 36 hour shifts, made riskier clinical decisions (on cognitive tests, not on actual patients) if they didn’t get at least an hour of nap time.

2. Your mood could swing all over the place.

“We know that decreased sleep leads to things like depression and anxiety in the long term,” says Augelli. But interestingly, missing a night’s sleep doesn’t induce an immediate depression; rather, “there’s almost a sense of mania,” first says Pyatkevich. Augelli agrees, noting it’s very transient, but that the first day of two without sleep can improve mood. “The elevated mood may be because certain neurotransmitters and other hormones were released to keep one awake,” she adds. The borderline-euphoric feelings won’t last, both doctors caution.

Meanwhile, your ability to determine what’s important to you and what’s not—especially within an emotional context—is greatly reduced when there’s a lack of sleep, a 2016 study from the University of Tel Aviv found. Published in the journal Neuroscience, lead researcher, Professor Talma Hender and her team found that “we lose our neutrality. The ability of the brain to tell what’s important is compromised. It’s as if suddenly everything is important,” Hender said in the study. That might explain why, when you’re tired and cranky, your roommate failing to take out the trash is the worst thing that ever happened to anyone ever.

3. Your skin may not look as fresh (not to mention those bags under your eyes).

While both Augelli and Pyatkevich note that there’s extremely limited research about sleep and skin (yet both agree it would be fascinating to find out more), there was a 2013 study conducted at the University Hospital of Cleveland. While it is worth noting that the research was funded by skincare giant Estee Lauder, the results found that there was a correlation between sleep deprivation and skin aging (think: wrinkles, dark spots).

In addition to cosmetic concerns, Augelli is careful to point out that there are certain skin disorders that can be made worse by a lack of sleep, like atopic dermatitis and psoriasis—in the long term. It’s not like you’re going to wake up scratching everything after a poor night’s rest.

What you will see with just one night’s bad sleep, though, are dark circles and bags under your eyes, says Augelli. (But we’ve got a fool-proof plan for covering those bad boys up.)

4. Your appetite will skyrocket—and generally not for, like, a kale salad.

If you’ve ever pulled an all-nighter, you may notice the first thing you reach for is a basketful of greasy French fries. That’s exactly what Pyatkevich also craved when she was in her sleepless residency. “Sleep deprivation effects can show up pretty quickly as appetite changes,” says Augelli, who too talks of her food cravings during her own residency. “Your levels of ghrelin, a hormone responsible for letting your brain know you’re hungry, goes up when you’ve had insufficient sleep,” says Augelli. What’s worse is that levels of ghrelin’s complementary hormone, leptin—which signals to the brain that you’re full—drops without solid rest. So not only are you having signals sent to your brain to keep on eating, but there are also no signals going to your brain that you’re full. Meaning you’ll just keep. on. eating.

Plus, Pyatevick says we tend to reach for fatty, salty foods—just like the French fries she loved—when we’re under-rested, though she’s not exactly sure of why we crave those types of foods.

A new study might give us a clue. These food cravings sound like the same munchies you get from smoking weed—and brand new research from the University of Chicago has found they may just be the same thing. The study findings, published in the journal Sleep, show that both marijuana and not getting enough sleep activate the body’s endocannabinoids, which cause people to overeat, even when they’re not hungry. And the cravings tend to be for what the study author Erin Hanlon describes as “yummy, fatty foods.” So maybe that explains our hankering for French fries.

5. Your metabolism is going to sloooow doooown.

As if your increased appetite wasn’t already contributing to weight gain, a slowed metabolism can also result when you lose sleep. “Long term, your body’s metabolism changes because it doesn’t intake food the same way, creating insulin resistance. This is when your body tends to store more of what you eat instead of processing it normally,” Augelli tells SELF.

Insulin resistance may also put you in a pre-diabetic state, a dangerous spot to be in. “Your body’s ability to store the glucose is impaired, which over time could lead to diabetes,” Augelli adds. “This is why it’s so important to get enough sleep as a part of a healthy weight-loss routine”—or to maintain your current, healthy weight.

6. Sleep deprivation is bad for your heart, too.

Reminder: sleep is a time for your body to reset. Our blood pressure and heart rate drop as our body repairs itself from the day before and gets ready for the day ahead. Losing out on quality hours means missing out on this downtime for your ticker and “can lead to overall worsening of your cardiovascular health,” particularly when it comes to raising your blood pressure, says Pyatkevich. That’s due to the body’s increased production of the stress hormone, cortisol.

Additionally, inflamed blood vessels near the heart will see plaque build-up over time, “which obviously increases your risk for heart attack and stroke,” Augelli tells SELF. “Plus, you’re making your heart work harder when you’re not getting enough sleep—the body will produce adrenaline, which in high doses can be taxing to your heart.”

7. Your athletic performance will inevitably decline. (Have you tried to work out without any sleep?)

You could argue that exhaustion from missing a night’s sleep could cause a whole bunch of side effects, like a non-existent sex drive (not tonight babe, I’m too tired) or a bad mood (after the possible euphoria explained above), but it can also cause whatever your workout is to suffer the next day, too. Augelli says “we haven’t found big correlations between somebody not sleeping one night and an athletic performance the next day,” but long-term, it’s extremely important for both pro athletes and regular folk to get ample rest. “Otherwise, your reflexive time will decrease with the degree of sleep deprivation,” she explains. For competitive athletes, sleep is extra important for performance—so much so that extra snooze time will improve performance, according to a 2011 study in Sleep.

8. Your immune system will weaken, both immediately and over time.

When I would pull all-nighters in college for Finals week, I’d almost always come home for break with some sort of illness. Turns out for good reason. “Your immune system is compromised when you don’t get enough sleep,” says Augelli, even for one night. Similarly, Pyatkevich notes that we’re more likely to have a decreased ability to fight the common cold and more likely to develop pneumonias from simple viral infections.

“You may not have some of the same blood cells and other factors that would attack bacteria and viruses to keep those types of infections away,” Augelli tells SELF. “Your body just can’t mount as good of a response to an invader.”

All of this, unfortunately means that a lack of sleep is inextricably tied to a higher rate of mortality, which increases with less than seven hours of regular sleep (but more isn’t necessary better, sleeping more than eight hours a night regularly is also associated with a greater risk of death from any cause). Scary, right? So maybe next time skip the party and get into bed. It’s so much cozier there, anyway.

Source: What Happens to Your Body (and Metabolism) When You Don’t Sleep Enough – Hello HealthyHello Healthy

Congress May Back Off New School Lunch Standards: It’s A Matter Of Ta...