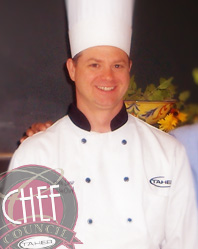 Growing up on a sustainable hobby farm in rural northern Illinois cooking on an 1820 wood cook stove, is where Chef Christopher learned about our connections to the earth and how and where food comes from. It was here where Christopher got his commitment to natural sustainable foods.

Brought up in a home that valued fresh gourmet food Christopher was cooking as soon as he could push a chair to the counter.

Christopher got his first commercial cooking job at a nearby Chicago land retreat hotel at 15. After high school Christopher moved to Colorado Where he cooked for 6 years eagerly learning everything he could from the chef’s he was working under. Along the way Christopher found himself cooking for rock stars and politicians.

In 1994 Christopher moved to Minnesota and opened the award winning Whistle Stop Café and catering, which he and two partners ran successfully for 7 years. Then Christopher took a job as the Executive Chef at Café POMME DE TERRE a classic French restaurant.

Christopher took three years off to stay home with his new children before joining Taher as Executive Chef at the Blake School in 2006. In 2007 Christopher joined the chef council on their trip to Morocco and Paris and has been traveling and learning with them since.