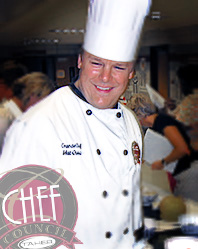 Matt Quist is a graduate of the Culinary Arts program at Johnson & Wales University in Providence, RI (1992), and the Culinary Institute of America in Napa Valley, CA (1999).

In 2000, he joined the Taher team in a dual role as the manager/chef at HealthPartners and as a corporate chef. Shortly after, Matt assumed the position of full-time Corporate Chef, sharing his passion for food by performing display-cooking sessions and mentoring colleagues and students.

Between the summer of 2007 and fall of 2008, Matt enthusiastically spearheaded the opening of several new restaurants in Minnesota for Taher, including: The Wayzata Eatery & Wine Bar in Wayzata, MN (summer of 2007); the Alaska Eatery & Glacier Bar in St. Louis Park (summer of 2008); and the historic Forepaugh’s Restaurant & Bar in St. Paul (fall of 2008 – following a million dollar renovation).

As a member of Taher’s Chef Council, Matt also supports this growing food service organization through research, education and hands on training. Each year, Matt participates in Taste of the NFL, during which top chefs from across the country gather at the Super Bowl and prepare meals for the homeless in the host city. This event has been featured on Good Morning America and on the Food Network.